In what will be the largest Vipassana course in recent times, a 10-day course has been planned for 1,200 police training cadets at the Police Training College, near Delhi. The course is tentatively scheduled to begin on 5th March, 1999. About 20 Vipassana Teachers are expected to be serving the course.

This mega Vipassana course has been the result of the first ever Vipassana course within a Police training academy for cadets. From 1st January to 12th January, 1999, a 10-day course was held at the sprawling campus of the Police Training College, 40 km from Delhi. The College trains over 1,000 cadets. About 35 students, participated in this course.

A major highlight was that Ms. Kiran Bedi sat this course, her first Vipassana course. Ms. Bedi who is a Police Commissioner, has been instrumental in organising Vipassana courses in prisons, particularly in Tihar Jail and amongst the police force in India. The course at the Delhi Police Training College was a success, with only one student leaving due to health reasons.

Discourses were organized for cadets not participating in this course. Speaking to the teacher conducting the course, Ms. Bedi expressed her great happiness at having received Dhamma, and regretted not having undertaken a course earlier. She is planning to encourage her parents and other family members to sit a Vipassana course soon. She also announced that a travelling allowance would be given to every police cadet and one of his family members to take a Vipassana course in Dhamma Giri, Igatpuri. A weekly group sitting and meditation facilities for the cadets was also announced. The enthusiasm and success of the January '98 course has paved the way for the historic course in March. After the 1200-student course, it is expected that doing a Vipassana course will become part of the regular training imparted to police cadets in Delhi. 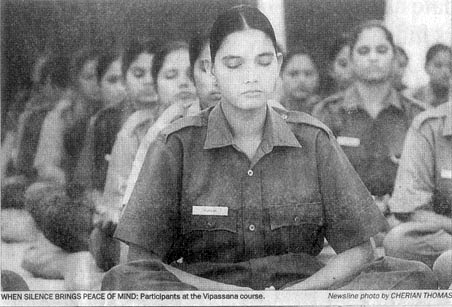