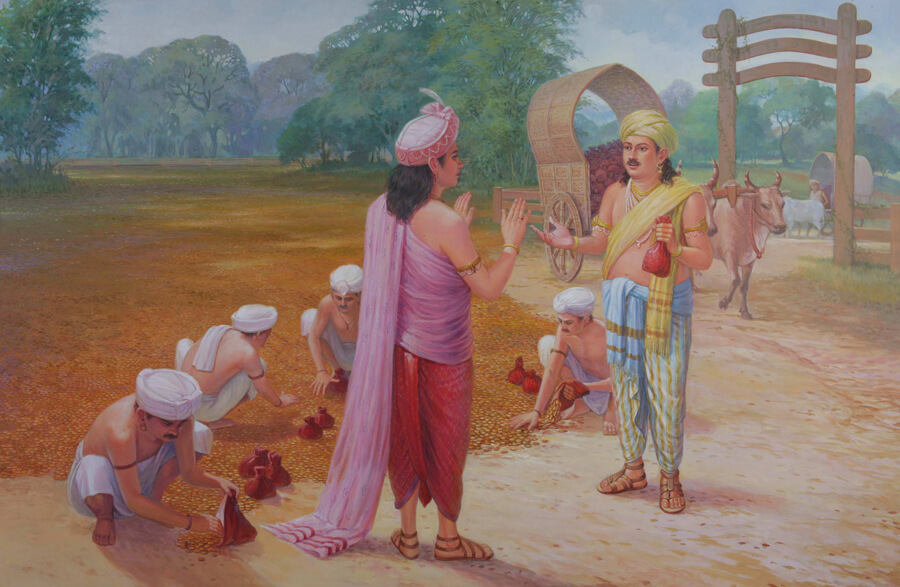 Influenced by the teachings of the Buddha, Anathapindika bought Jetavana park, by spreading gold coins over entire land, to build a vipassana Center
Image Source: Painting from the gallery of Global Vipassana Pagoda

​Anathapindika, a rich merchant from Savatthi (Shravasti), had come to Rajgir to visit his in-laws. When he heard that the Buddha had been invited for lunch at his brother-in-law’s house the next day, he became very eager to meet the Buddha. The next day, before dawn he started walking towards the woods, on the outskirts of the town, where the Buddha was staying.

The Buddha addressed him by his name, ‘Come, Sudatta!’

Anathapindika was delighted that the Buddha called out to him by his name. The Buddha gave a Dhamma discourse which put his mind at ease making him happy and peaceful.

Due to his past merits, while hearing the sermon, the knowledge of impermanence arose within him and he attained the first stage of enlightenment (sotāpanna). Extremely gladdened, he invited the Buddha for a meal the next day.

The next day after the meal, the Buddha gave a sermon following which Anathapindika requested him, ‘Venerable sir, please spend the next monsoon in Savatthi along with the bhikkhu Sangha.’

The Buddha replied, ‘O householder, the Buddha likes to dwell in solitude.’

As soon as he reached Savatthi, he started searching for a suitable place for the residence of the Buddha—a site neither too far from the city nor too close, easy for people to reach, not too crowded in the day or noisy in the night, and conducive for meditation.

Finally, he came across Prince Jeta’s park, which seemed to be ideal. He went to the prince to buy it from him. The prince did not want to sell his garden. To avoid sale, the prince said that the entire land of the park had to be covered with gold coins as a price for the land.

Anathapindika agreed to the price and immediately fixed the deal. The land where the Buddha would teach the Dhamma was indeed invaluable! Anathapindika brought carts filled with gold coins and the coins were spread on the land of the park.

On seeing this, the prince was startled. One part of the land was yet to be covered by coins. Anathapindika instructed more coins to be brought but the prince took Anathapindika’s hand in his own hand and said, ‘Enough, householder, do not cover this uncovered part with gold. This will be my donation.’

Anathapindika accepted the prince’s offer. He built residences, halls, water boilers, storehouses, lavatories, open and closed walking areas, water tanks, bathrooms and tents to enable thousands to learn the Dhamma under the guidance of the Buddha. The Buddha’s devoted lay disciple created an unparalleled record in the history of charity. The Buddha acknowledged him as ‘foremost’ (agga) among those who give donations.