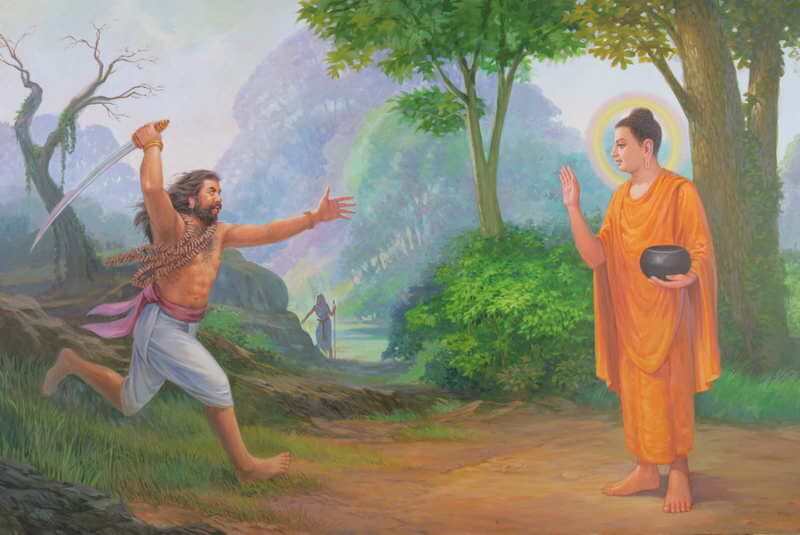 A malicious rumors drove a youth, named Angulimala, to live as an outlaw in the jungle. In a deranged state of mind, he vowed to kill a thousand human beings. To keep track of the number of his victims, he took a finger from each and added it to a string around his neck. This is how he became known as Angulimala, or “Finger-Garland.”

Angulimala became the terror of the countryside. Everyone was afraid. The king heard about him and decided to capture him.

When his mother heard this news, she went to the forest to save her son. By this time, Angulimala needed only one more finger to fulfill his vow.

Now, the Buddha was staying nearby. He learned that Angulimala’s mother was going to try to find him and save him. But there was a danger that the son would end up killing the mother. To prevent that, the Buddha himself went to the forest to find the young man.

Angulimala had not slept for days and was close to exhaustion. At the same time, he was very anxious to kill the thousandth person and complete his task. He made up his mind to kill the first person he met. Perched high on a mountain, hidden by trees, he saw a woman on the path below. He descended but then he saw it was his mother.

At that moment, the Buddha appeared on the path. Angulimala decided to kill him instead.

He charged after the Buddha with knife raised, but the Buddha kept moving ahead out of his reach. Angulimala could not catch up, no matter how much he tried.

The Buddha replied, “I have stopped. It is you who have not stopped.”

Angulimala didn’t understand. He asked, “Why do you say that you have stopped while I have not?”

The Buddha replied, “I say that I have stopped because I have given up killing all beings. I have given up ill-treating or harming all living beings. I have cultivated love and patience through meditation. But you—you have not given up killing or ill-treating others, and you have not cultivated love and patience. Therefore, you are the one who has not stopped.”

These words penetrated the fog of Angulimala’s mind and calmed his rage. He thought, “This man is wise and brave. He must be the Buddha himself. He must have come here just to help me!”

Angulimala threw away his weapons and asked the Buddha to teach him meditation and wisdom. The Buddha agreed.

When the king and his men came for Angulimala, they found him in the Buddha’s forest meditation retreat. Since the outlaw had given up his evil ways, the king agreed to leave him alone. Angulimala sincerely and seriously practiced meditation and the training of moral conduct.

Still, he had no peace of mind. He kept remembering what he had done in the past. He recalled the pathetic cries of his victims.

Whenever he went out in public, people recognized him and attacked him, leaving him bleeding and bruised. He felt guilty and thought that he was too horrible a person to ever be happy and peaceful, no matter how hard he tried.

The Buddha reminded him, “My son, you have stopped doing evil but are still suffering the consequences of your past actions. Have patience. Everyone can change for the better, no matter what they have done. No one is too bad to change, and you have changed. It doesn’t matter whether people realize it or not. Keep practicing your meditation patiently.”

One morning while he was in the streets near the meditation retreat, Angulimala heard someone crying in pain. It was a woman suffering the agonies of childbirth.

He stopped and thought to himself, “All human beings suffer.” He began to have deep compassion for the woman and all the people he had harmed, as well as for himself and all living beings.

Angulimala lived peacefully after that. When people heard about the change in him, they asked the Buddha, “Can it be true? Can a man who has killed so many people ever really learn to concentrate and calm his mind? Can he really have a peaceful and balanced mind? Is it possible for him to live a good life after all he has done?”

The Buddha answered, “Yes. He harmed so many people because his mind was overwhelmed with hurt and anger. He had been badly harmed himself. Later, he listened to good advice, he meditated, and his mind became strong and healthy.”

No matter what someone may have done in the past, developing concentration can help. It is a powerful tool for gaining real peace of mind, and cultivating kindness and compassion for others.