Stories of Select Disciples of the Buddha 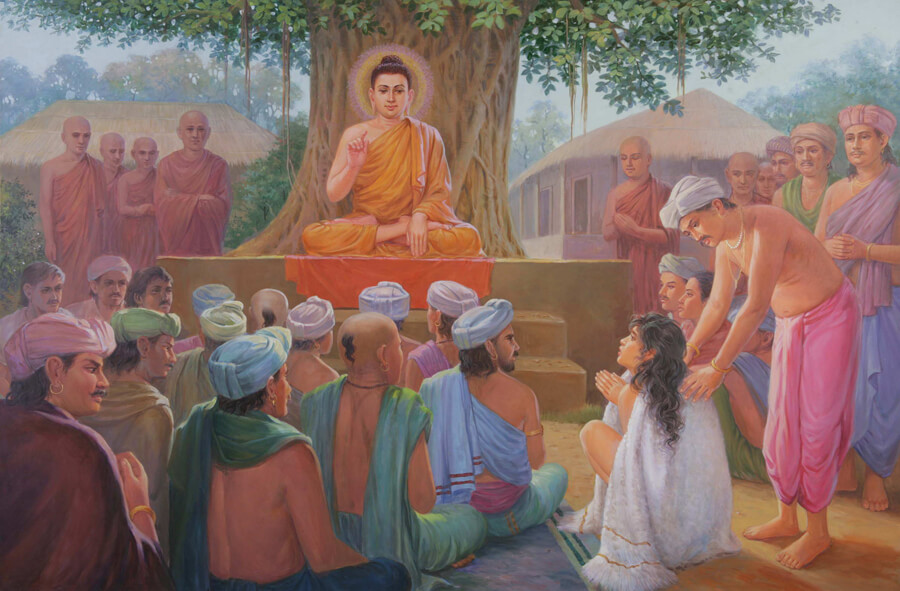 (The woman, who lost everyone in the world and became mad with giref, listening to the Buddha's discourse. She was renamed as, "Paṭācārā", the one covered with a shawl")
Image Source: Painting from the gallery of Global Vipassana Pagoda

She was born in a very rich merchant family of Srāvastī. There were four members in the family - the rich merchant, his wife, their son and their daughter. This small family resided in a large seven-storied building in Srāvastī. When the girl came of age, a young servant was appointed to serve her. Because of his bad company she strayed from the right path. Lest she should be married to somebody else, the two of them took whatever wealth and ornaments they could lay their hands on and eloped. They went to a small village far away from the city and began to live as husband and wife.

They managed as long as the wealth stolen from her home lasted. At last, they started spending their days in extreme hardship. After two years, she became pregnant. She gave birth to two sons, but as ill luck would have it both died in an accident. Her husband also died after being bitten by a cobra. Weeping and wailing, the poor unlucky woman set out alone for Srāvastī. Even before she could reach there, she learnt at the cremation ground that there was a storm and heavy rainfall the previous night, and that her father's seven storied building had collapsed. Her father, mother and brother were all crushed under the debris. Now she had no one in the world to call her own. Unable to bear the blow, she lost her mental balance and without any cloth on her person, started roaming in the streets of Srāvastī.

When she was in such a miserable state, one day, because of her previously accumulated pāramīs, she passed by the Jetavana monastery, where the Buddha was preaching Dharma to the people. Listening to the words of Dharma, she came near the Lord. The Blessed One spoke compassionately to her, "My poor child! Come to your senses!" His affectionate and kind words were full of nectar. As soon as she heard these words, she recovered some of her senses. She realized she was naked. Ashamed, she sat down drawing herself closer together. Someone, who was sitting close by and listening to Dharma, put his shawl over her. Since then, the poor woman was known as "the one covered with a shawl" i.e. "Paṭācārā". She sought refuge in the Buddha. The Buddha assured her, "Child, take refuge in the Dharma. Dharma will give you true refuge."

Hearing the words of pure Dharma from the Lord, her mind became concentrated and she began to practice Vipassana. As a result of her past Pāramīs, she became a stream enterer (srotāpanna) then and there, The Blessed One got her ordained. Practicing Vipassana that liberates one firmly she became an Arahant from a srotāpanna. She achieved all that was to be achieved as a human being and was completely free of sorrow.