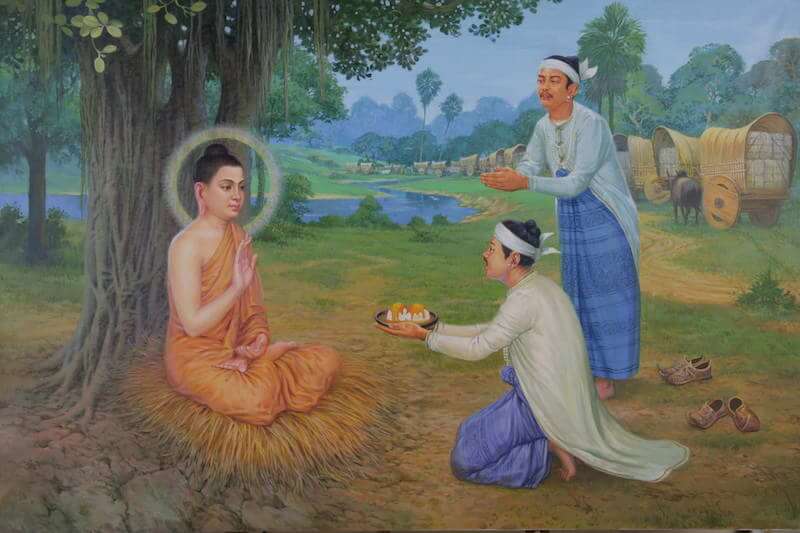 Businessmen Tapussa and Bhallika offering the Buddha rice and honey cakes from Myanmar. This was the first meal taken by the Buddha after enlightenment.

Image Source: Painting from gallery of the Global Vipassana Pagoda

In those days, the people from Orissa (Ukkala, Utkala) who had gone to reside at the mouth of Irāvatī river of Myanmar built a city and named it Ukkala in the memory of their own land. Businessmen from many different parts of India settled in Ukkala.

Tapussa and Bhallika, two brothers, also lived there. But they were from Balhik, known today as Balakha, which is 18 km to the west of Afghanistan’s Majār-e-shareef.

When the Buddha attained enlightenment, Ukkalapati was the king of Ukkala. Tapussa and Bhallika both did business there. Both traveled to India and back from Ukkala for their business. Their goods brought to Tamralipti from Myanmar via the sea were loaded on 500 carts to be sold in India. While passing through the Uruvela jungle, they had met the Buddha. At that time, the Buddha had just spent seven weeks in the blissful state of liberation and was seated under the Rajāyatana tree, close to the Bodhi tree. Both offered him rice and honey cakes from Myanmar. This was the first meal taken by the Buddha after enlightenment. They received eight hair tufts from the Buddha and returned to Ukkala. King Ukkalapati enshrined these hair relics respectfully in the Botahtaung, Sule and Shwe Dagon stupas, which are revered by people to this day.

Tapussa and Bhallika took the five precepts from the Buddha at that time but did not hear any discourse. (The Buddha gave his first discourse in the Deer Park at Varanasi.) After enshrining the hair relics of the Buddha in Ukkala, Tapussa and Bhallika again returned to the country of Magadha and received the teachings from the Buddha. Bhallika took robes and reached the stage of arahathood. Tapussa reached the stage of sotāpanna, remained a householder and continued his business. He developed in the Dhamma and served many others. The Buddha gave both the brothers the title of being ‘the foremost’ (agga).

It is believed that these two gave a few hair relics of the Buddha to Myanmar and kept the remaining few to themselves so that they could construct a monument (stupa) and meditate there. They wanted both their motherland and adapted land to be blessed with the valuable gift of the Buddha. Therefore, they went to Balakha (Bāhallika, Bhallika) the land of their ancestors in the north.

These two brothers were born in a small town named Asitanjana near Balakha. After going there, close to the main gate of the town, they constructed a huge pagoda (stupa) and respectfully enshrined the hair relics there.

Blessed are Tapussa and Bhallika, who were instrumental in building stupas and enshrining the hair relics in both the eastern and the western neighboring countries of India.