Stories of Select Vipassana Centers: Dhamma Giri, India | Dhamma Dipa, UK | Dhamma Bhumi, Australia |Dhamma Dhara, USA | Dhamma Mahavana, USA | Dhamma Pataka, South Africa | Dhamma Sukhada, Argentina | Latin America: The New World of Dhamma | Dhamma Iran, Iran | Dhamma Pallava, Poland | Dhamma Mahi, France | Dhamma Jyoti, Burma |
With well over half a billion people, today Latin America is one of the most dynamic parts of the globe. It is also a region in which the Dhamma is growing at an extraordinary pace. In only a decade and a half, almost every one of the region’s countries has hosted courses, and the demand continues to grow.

Before the 1990s, quite a few students from Latin America took courses in India or the West, but no course was organized in Latin America itself until September 1991. Panama was the location for that first course and, as sometimes happens, the start was a little shaky. Because of some confusion, the police came to the site on Day 7 and took the assistant teacher and students to the local jail for questioning. They were quickly released but the course came to an early end.

Despite that, the results were significant. Some of the students returned for full 10-day courses and now help organize activities in Panama. What’s more, people in other countries were inspired when they read about the course in the Vipassana Newsletter. They too began looking into the possibility of organizing courses where they lived.

Those efforts bore fruit in March 1994, when the first full 10-day course took place in Venezuela. In addition to local participants, meditators from neighbouring countries came to sit and serve on this course. From here the stream of Dhamma started flowing through many other countries of the region. In October and November 1994, courses were given in Brazil and Argentina, and again in Venezuela. The next year saw courses in Panama, Chile and Mexico, as well as Brazil, Argentina and Venezuela. Cuba had its first Vipassana course in 1996, Bolivia in 1997, Colombia and Peru in 1998, Ecuador in 1999, Uruguay in 2001, Puerto Rico and Paraguay in 2003, the Dominican Republic in 2004, Nicaragua, El Salvador and Costa Rica in 2006, and Guatemala in 2007. Many countries now offer courses at more than one location. There have also been long courses, children’s courses and prison courses. On the 2010 schedule are 75 10-day courses, three Satipatthana Sutta courses, three 20-day courses, one 30-day course, six three-day courses and six children’s courses.

All this activity clearly shows that the clock of Vipassana has struck in Latin America, for the good and happiness of many.

“Dhamma Makaranda” means “Nectar of the flower of Dhamma.” It began offering 10-day courses in 2003. It is located near Valle de Bravo, a beautiful colonial town beside a large lake, in the highlands of central Mexico. The center is a pleasant two-hour drive west from Mexico City. The 10-acre property is in a quiet, secluded valley, surrounded by pine and oak forests and small farms.

The Centre can now accommodate about 50 students, mostly in double rooms. Sleeping tents are also used during the dry season. A small Dhamma hall can hold up to 60 meditators. Plans call for construction of a proper teachers’ residence, a larger Dhamma hall and more single accommodations.

“Dhamma Santi” means “Peace of Dhamma.” The center is surrounded by pristine, protected rainforest, in an area reputed to have the cleanest air on the planet. Rio de Janeiro is two hours away, and São Paulo and Belo Horizonte are four hours away. This is the most populated part of Brazil and the area with the most Vipassana meditators.

The first course at the center was held in April 2003 and regular 10-day courses are now conducted, including courses for old students. In 2011, Dhamma Santi will offer 22 courses.

The center was built to accommodate 70 students but it often exceeds that number. Waiting lists are long. Plans call for expanding the capacity to 120 students and 20 servers. This involves improving the water and sewage systems, expanding the Dhamma hall, and building new dining halls, new meditation cells, more private accommodation for students, and rooms for managers.

Inside the Dhamma hall at Dhamma Santi 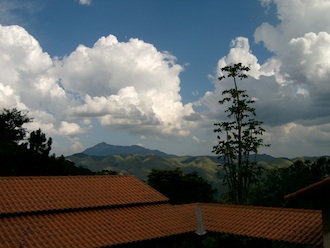 The “Bamboo Grove of Dhamma,” Dhamma Venuvaṇa is located 90 minutes from Caracas. Located at an altitude of 1,400 metres (4,000 feet), the center enjoys wonderful temperatures all year round. Goenkaji named it after one of the places where the Buddha himself stayed; at the time, Goenkaji did not know that there were stands of bamboo on the land. More will be planted in the future so that Dhamma Venuvaṇa truly brings to life its ancient namesake.

The center was purchased in March 2006 and the first 10-day course was held in April of that year. The facility had originally been built for retreat purposes but was never used. At present the center can accommodate around 50 students; the capacity will eventually be expanded to 80.

Goenkaji named Argentina’s first center “The Happiness of Dhamma.” It is located in a peaceful environment about 85 kilometres from Buenos Aires. The first phase of construction has started, with the aim of accommodating 60 students. The hope is to start holding courses at the center in 2011.

Other centers are in the planning stage in Peru (Dhamma Suriya) and Chile (Dhamma Pasanna).

Following are only two examples of how Vipassana is spreading to all parts of Latin America.

The first 10-day course in northern Mexico was held this August at a rented site on the outskirts of Monterrey. A total of 51 students (42 new and nine old) completed the course. The participants came from all over the country. The course was organized within five weeks’ time, shortly after a devastating hurricane hit the city of Monterrey. The success of this course has led to the scheduling of two more 10-day courses for this December, with a capacity of 90 persons in each course. The Monterrey Vipassana Group is holding weekly group sittings and one-day courses each month.

In January 2010, 185 people participated in a 10-day course on the island of Chiloé, in Chile. The largest previous course in that country had been for 70 students. It took a massive effort to handle the doubling in numbers: there were 25 servers at the January 2010 course and three assistant teachers. The students had beds but no cushions for sitting. The servers slept on the floor. The only place large enough for a Dhamma hall was an unroofed area between two wings of the facility. The amount of food ordered in advance was insufficient, and from Day 3 the course organizer scoured the markets in neighboring towns. Somehow the problems all were resolved and the course ended happily. Another course has been announced for January 2011; it filled up almost immediately and now has a long waiting list. This is a common situation in Latin America.